Lady Bird Lake in Downtown Austin always makes for a great backdrop with scenic views that look like they’re ripped from a quaint greeting card. In this image, my bride and groom requested that we take a limo from the wedding site to Lady Bird Lake for some romantic photos next to the lake shore. It was a fantastic idea and the photos prove it. 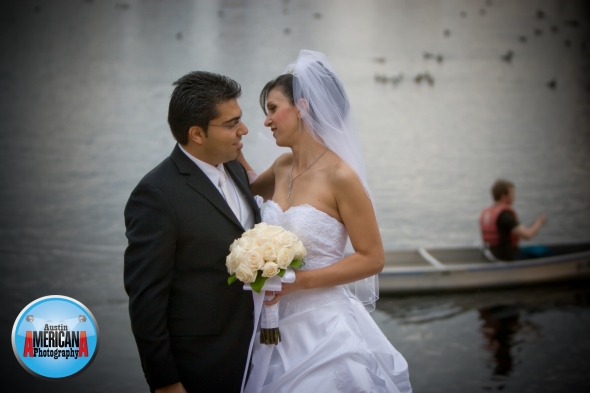 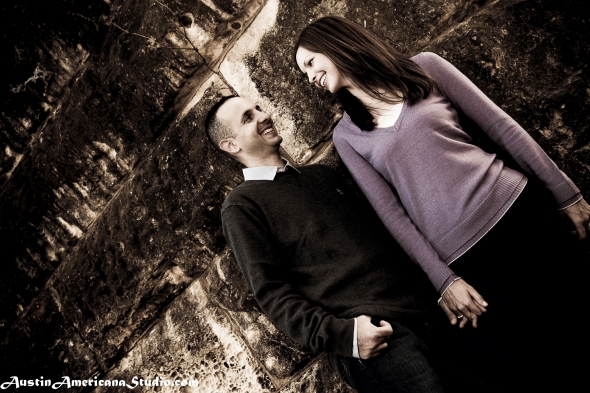 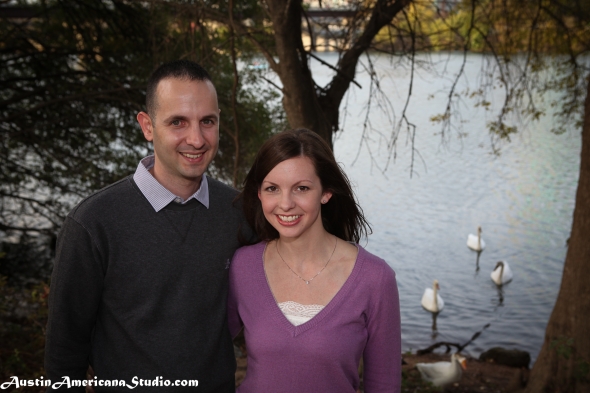 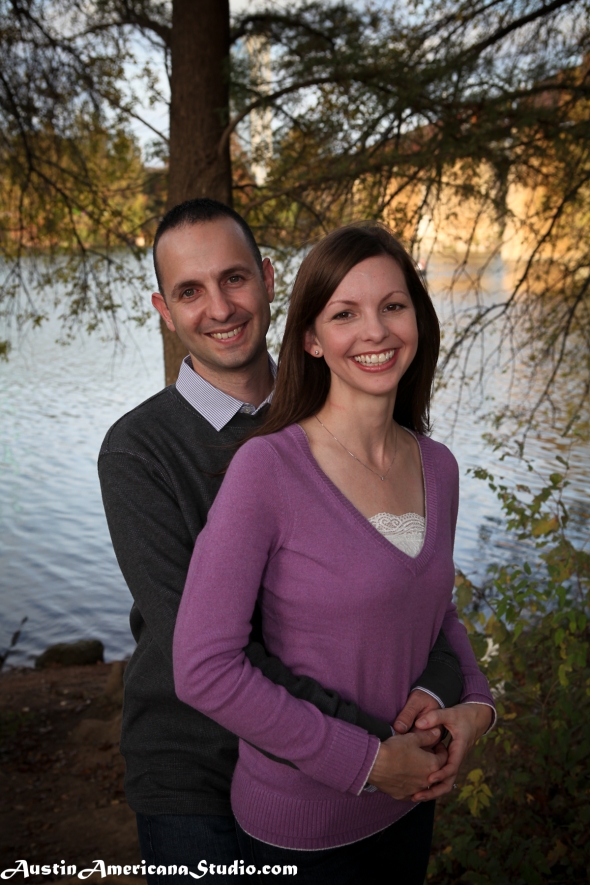 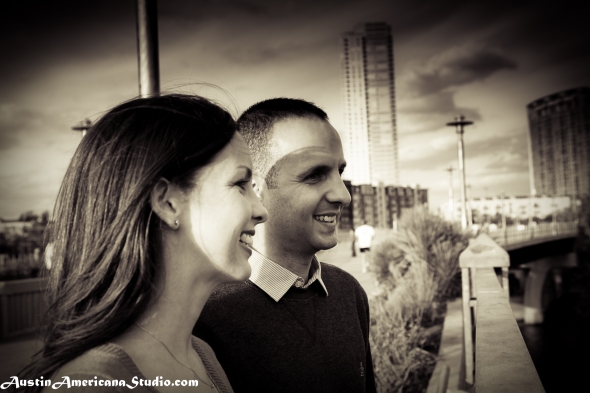 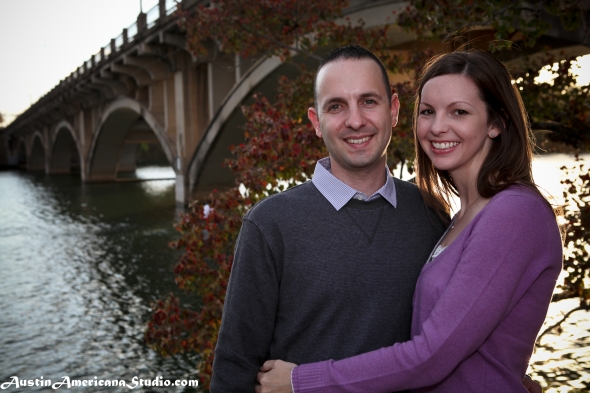 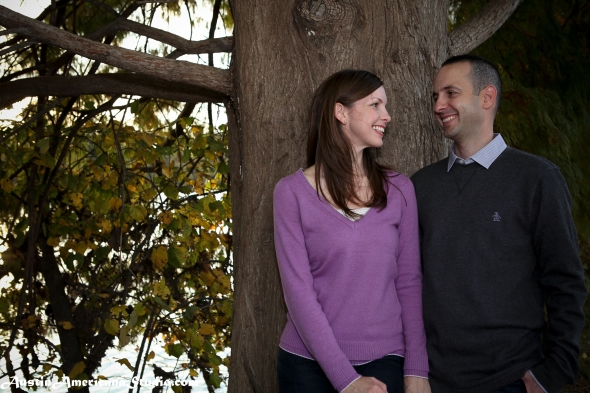 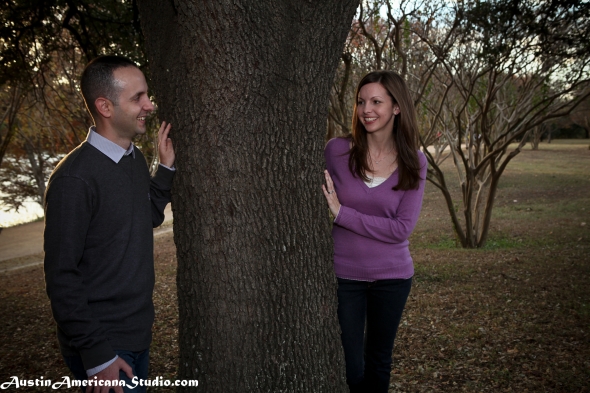 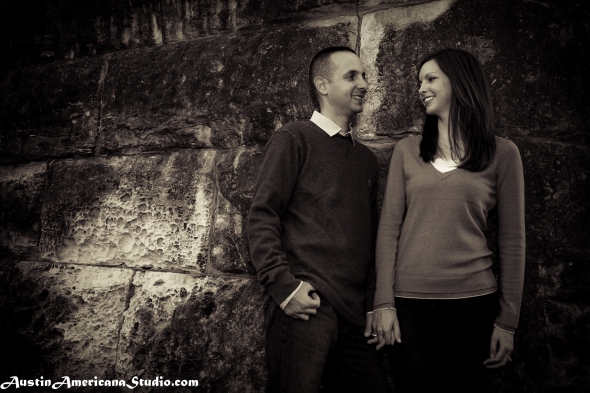 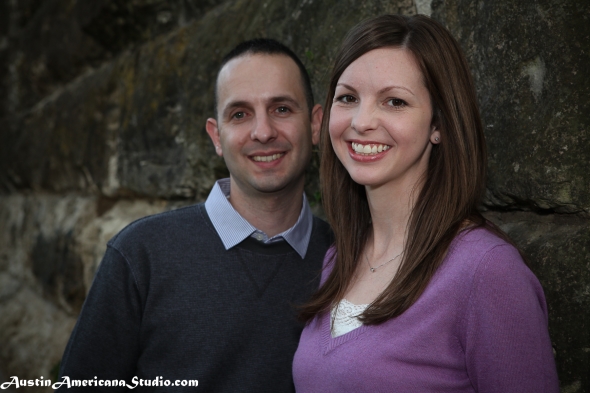 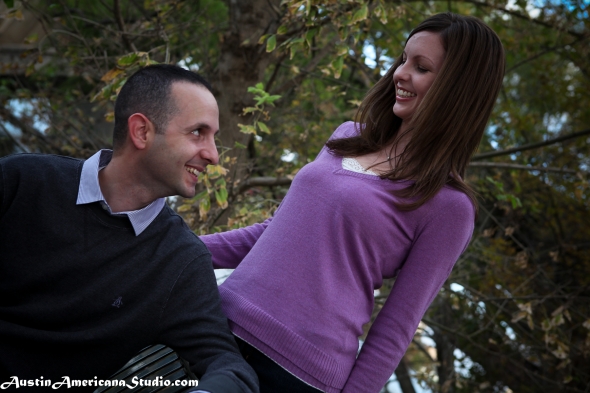 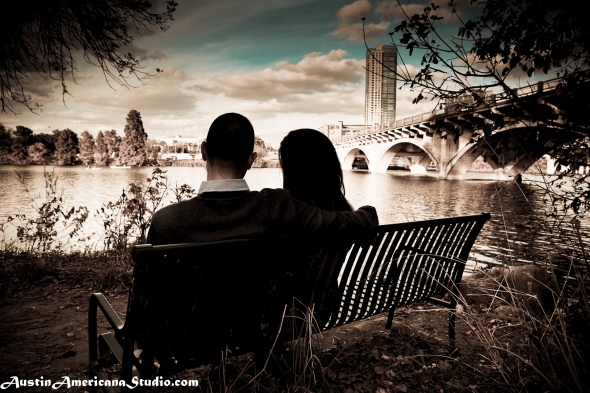 Town Lake (aka, “Lady Bird Lake”) is one of Austin’s most precious resources and one of her not-so-hidden gems. And it’s one of my favorite outdoor locations to take brides and grooms for engagement photography sessions!

Some of the wonderful features offered by the lake are its convenience (located in the heart of Austin near downtown), beauty, cleanliness (clean water, air, environment, etc.), trails for hiking and walking, open space and so much more. I like it for all those reasons and because it makes my photographed subjects (usually newly engaged couples) feel relaxed and somewhat connected to nature, a feeling which manifests in the photos.

The lake is named after Lady Bird Johnson who was chair of the Town Lake Beautification Project, a community effort to create hike and bike trails and to plant flowering trees along the Colorado River in Austin, Texas. Mrs. Johnson is also the founder of the National Wildflower Research Center, a non-profit environmental organization formed in 1982.

Town Lake (now Lady Bird Lake), downstream and south of the Highland Lakes on the Colorado River, was formed in 1960 by the construction of Longhorn Dam. The surface area covered by the lake is over 400 acres and is owned and operated by the City of Austin in cooperation with the Lower Colorado River Authority. It was created by the City of Austin for the purpose of being a cooling pond for the Holly Street Power Plant. 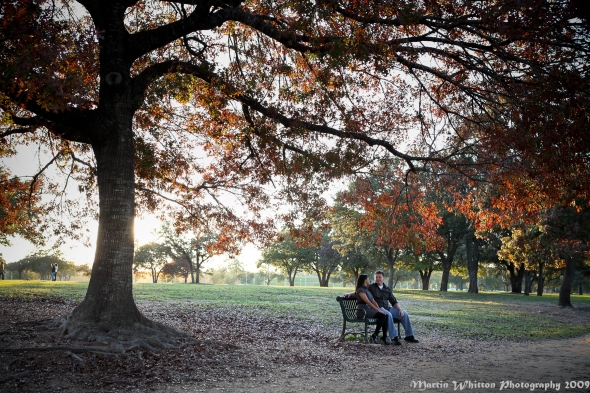 In the early 1970s the Town Lake Beautification Project was a recommendation made to the Austin City Council in commemoration of the upcoming United States Bicentennial Celebration which would occur in 1976. In 1971 when Roy Butler became Mayor of Austin, he began working with Lady Bird Johnson to form what would later become the Town Lake Beautification Committee. Mrs. Johnson was a primary contributor to the effort of improving the then “Town Lake”, which had become polluted with chemicals from area industry, littered with trash and had been left derelict without major oversight. In 1971, with the assistance of members including Emma Long, Jim Pfluger and Mrs. Roy Butler, the Town Lake Beautification Committee was officially off and running.

With the support of the local community and with new dams in place on the Highland Lakes, the sole purpose and goal of the project was to beautify the banks of Town Lake with trees and trails for Austinites to enjoy. A $2.5 million dollar Capital Improvement Project bond for the years 1975-1977, approved by tax payers provided funding for the undertaking.  Town Lake Metropolitan Park resulted as a dividend of the committee’s hard work and foresight – covering an estimated 5 miles of the north and south shores of the lake. The park includes numerous sports parks, outdoor event venues (Auditorium Shores), boat/kayak/canoe rental locations, swimming pools, picnic tables with grills, miles of running trails, pedestrian bridges (one currently under construction), restrooms, Butler Park (on the south side), many varieties of trees, look out points and more. 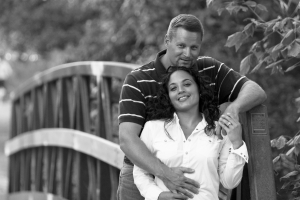 By the 1970s, Town Lake and its shoreline had become neglected, polluted and overgrown with weeds.[2] KTBC referred to the lake as an “eyesore.”[2] During his two terms in office (1971–1975), the Mayor of Austin Roy Butler partnered with former United States First Lady Lady Bird Johnson to establish the Town Lake Beautification Committee with the purpose of transforming the Town Lake area into a useable recreation area.[2] A system of hike and bike trails was built along the shoreline of the lake in the 1970s, establishing (what was then known as) Town Lake as a major recreational attraction for the city of Austin.

One of the most popular features of Metropolitan Park are the miles of hike and bike trails which run along both sides of Town Lake and allow runners and bikers a continuous exercise trail with the best view in town. Living a healthy lifestyle (including regular outdoor exercise) is considered to be in vogue in Austin, as is being seen on the hike and bike trail around Town Lake. Even celebrities like Luke Wilson, Lance Armstrong and our own Texas Governor, Rick Perry are rumored to be runners on Town Lake.

Many people know that the Colorado River is the primary source of water for Town Lake; however, there are also natural artesian springs near Deep Eddy which also act as a source of water for the lake. Today these natural springs are covered by the lake but still flow and can be seen by boat. Only sailing, rowing, kayaking, canoeing and other non-motorized water sports are permitted on Town Lake. Motorized craft of any kind (other than those specially authorized by the City of Austin are not allowed on any part of Town Lake. 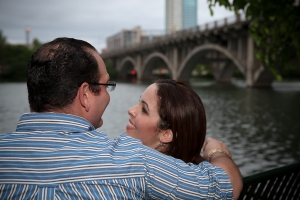