Trash The Dress: Tubing On A River

Ok, so I’m not sure if this qualifies as trashing the dress, which has been all the rage for the past few years, but it was definitely one of the more fun shoots I’ve had as a photographer in the past few years. And I think it’s a great idea.

Julia and Rick, who were married at Chapel Dulcinea in 2008 are featured tubing down the Guadalupe River here in Central Texas. A lot of brides tell me that they wouldn’t be willing to “trash” their wedding dress just to tube the Guadalupe River. But my bride and groom were more than excited about tubing in their wedding attire. And I have to give them credit for getting up relatively early on a spring morning to hop into a tube on the icy-coldGuadalupe River!

I knew this would be the perfect photo-op for my newlyweds, given the history of how they met. Julia and Rick met on a tubing trip to the Guadalupe River with friends – a trip that would eventually lead them both down the aisle together. So when I pitched the idea of the shoot to them they were surprised and excited.

As a result of the great images we were able to capture of Julia and Rick tubing in their wedding garb, the two became minor celebrities. Several of the photos from the event were featured on my Wedding old Website and at my old display at David’s Bridal here in Austin. Frequently when I meet with new clients they ask me about the shoot of the bride and groom on the river, which always brings a smile to my face…

Oh, and I’ve been holding on to a great *NEW* and fantastic idea for a “trash the dress” session, so if you’re interested let me know. Email me at austinamericana@gmail.com

Bride and Groom Tubing on the Guadalupe River 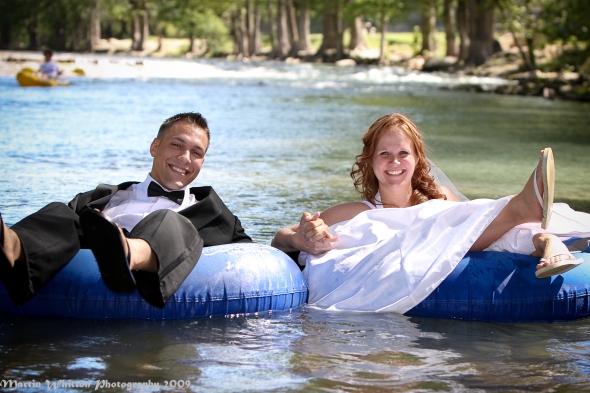 Tubing Down The Guadalupe River