Austin Americana completed another successful engagement photo session at Zilker Botanical Gardens here in Austin this week. Thanks go out to my gracious subjects, Jen & David, who I met through DealOn and who’ll be getting married in May. Congratulations guys!

There will be lots more photos coming soon as a result of our successful promotional event that was through our friends at DealOn, including at least one wedding, multiple engagement sessions and even a newborn session – all coming soon! How exciting! Stay tuned…. 🙂

This past week I had the pleasure of photographing another wonderful couple at Zilker Botanical Garden: Lindsey and Bryan. As I’ve blogged before, Zilker has to be one of the most popular places for photography of any kind in Austin. Not only is it a huge repository for plant life centered in Travis County (which is why people are drawn to it) but it’s also one of Austin’s little jewels that’s been around for many years. I’m pretty sure that the creators of Zilker never intended it to be one of the foremost popular venues for photography around Austin, but that’s what it’s become.

I met Lindsey and Bryan on a Saturday afternoon at Zilker to take advantage of the warm, orange evening sunlight. We walked to all of my favorite spots throughout Zilker and were able to capture some great photos. We even got some shots of Lindsey and Bryan in their Dallas Cowboys jerseys. All in all, it was a wonderful afternoon. 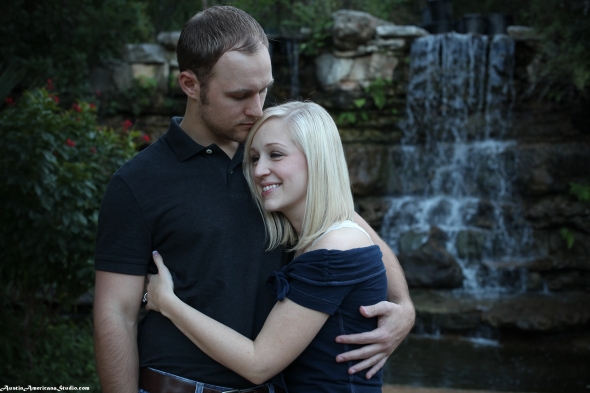 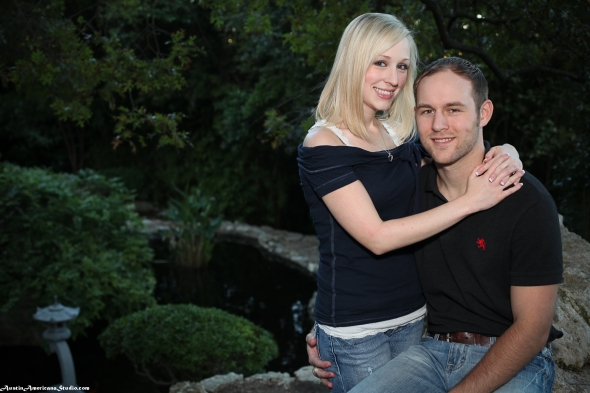 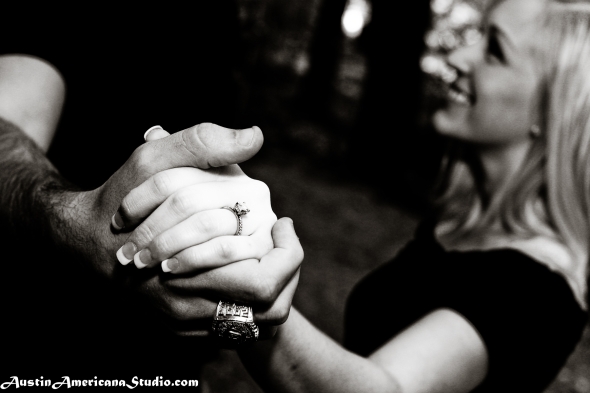 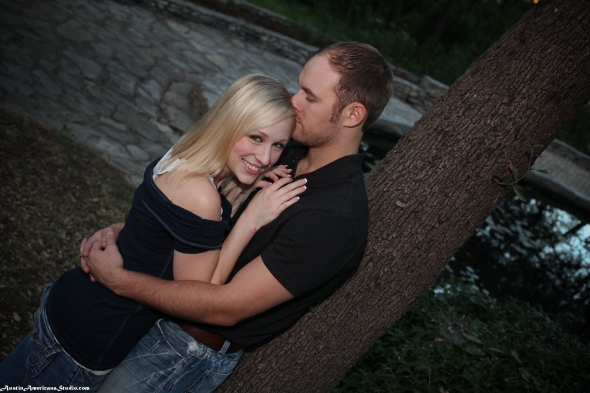 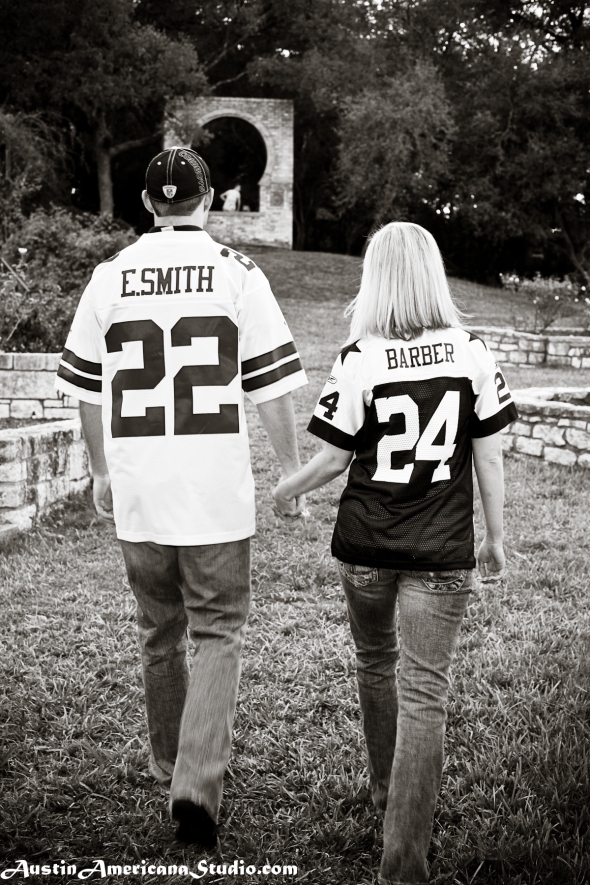 More on Zilker: ZBG features many different plant species and specific garden areas that are dedicated to a particular theme or cultural plant cultivation, if you will. For example, one of the popular areas of Zilker is the Japanese Garden, which features Koi-filled fish ponds, stone trails leading around bamboo gardens and a structure made of stone and bamboo that only could fit into a Japanese garden . The entire area is shaded by trees and feels like being in another world.

Zilker also features a beautiful rose garden where weddings frequently occur. Colorful roses line the concrete paths that wind down the hill from the main entrance of the park. The Rose Garden area is very open, located at the edge of the tree line bordering the Japanese Garden. It also features a red and white gazebo next to fish ponds and a historic brick structure in the shape of a keyhole that has been apparently transplanted from historic downtown Austin.

Other areas featured at ZBG are the Prehistoric Gardens further down the hill from the main office, which feature “old world” plants, pools and even a beautiful, natural-looking water fall. Toward the front of the park is an area that contains historic Central Texas pioneer homes and work areas made of wood.

Ultimately there are many, many different areas of the Garden that offer photography opportunities for brides or couples. After visiting and photographing friends and family there for years I’ve grown to love and appreciate Zilker for the beautiful part of Austin that it has always been and hopefully will always be!

Martin Whitton is the lead wedding photojournalist for Austin Americana Photography. He lives and works in Austin, Texas. Email: AustinAmericana@Gmail.com.

This past week I photographed a couple’s engagement in downtown Austin, which has been all-the-rage for some time now. Some of the wonderful elements that downtown has to offer are texture (which can be seen on brick walls/doors), skylines (imagine buildings stretching into the blue Texas sky) and murals. These were the things that I had in mind when I ventured downtown with Andrea and Taylor, and they made my job pretty easy.

Another concept that’s popular these days among both photographers and those being photographed alike is post processing of images – particularly contrast-y, grainy, saturated (i.e., heavily edited photography). And one of the great things that shooting digital allows is capturing the image as it is and then making copies of the image during post-processing for conversion to something different and artistic, which is what I’ve attempted to do here. The result means that I can provide my photography clients with a photo of what our shoot looked like (more/less) on the day we shot and also a version of the same photo that has been “artistically rendered”, shall we say. 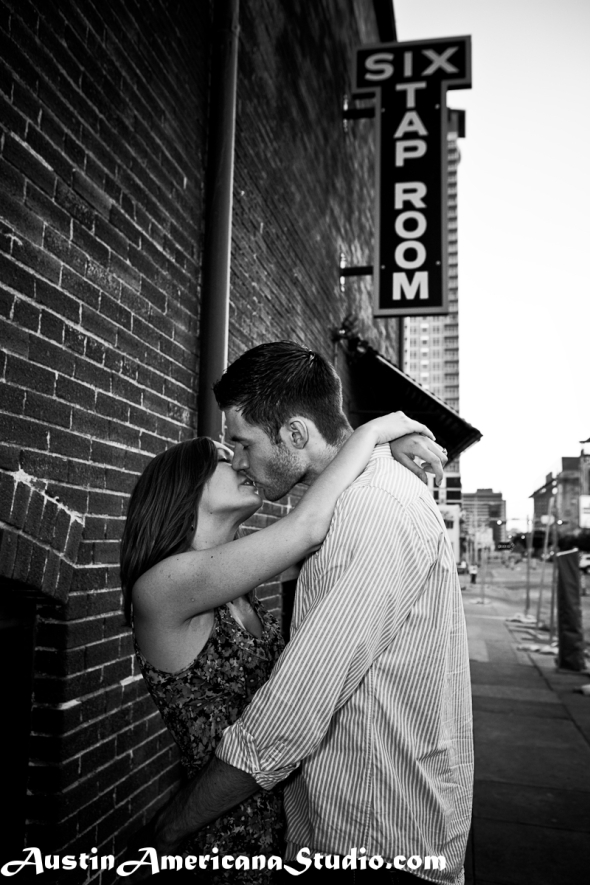 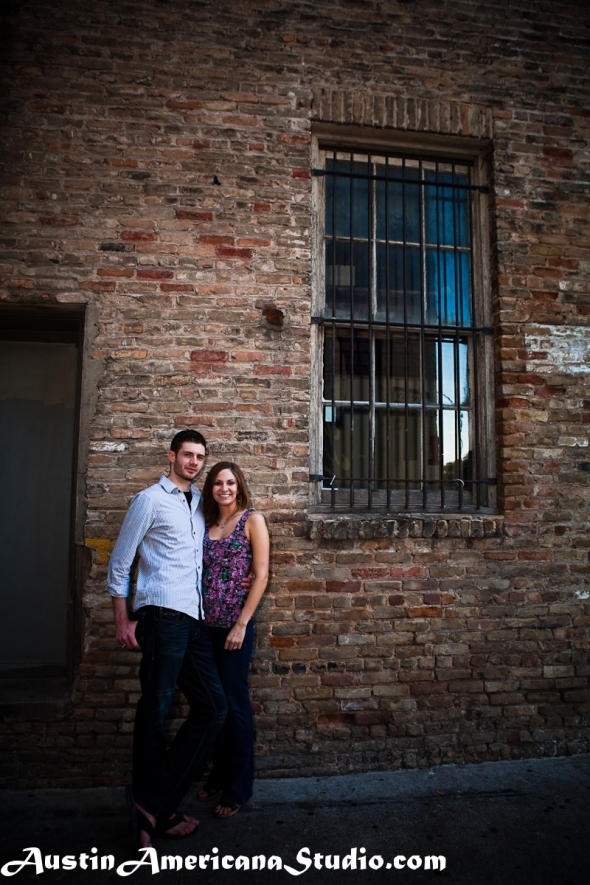 At any rate, there’s lots to see in downtown Austin. If you frequent downtown only at night then I recommend coming downtown on a Sunday evening and taking a walk down the same streets you usually visit (during the daylight). You’ll be pleasantly surprised by what there is to see. And we all could use a little exercise! 🙂

Til Death Do Us Part - Downtown Austin Mural 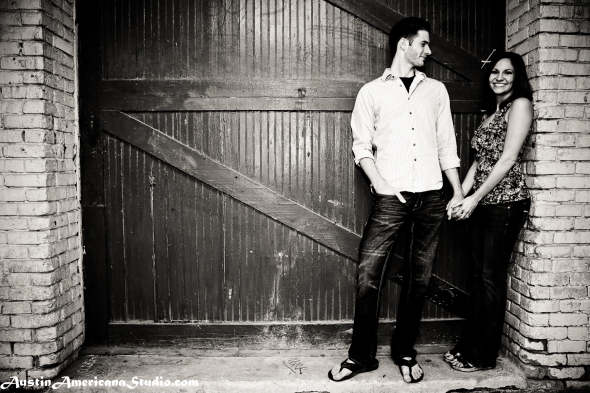